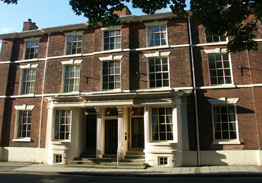 Georgian House for Sale, 10 bedrooms, all with fireplaces, dining Room, lounge, music room, study, library and servants quarters. Outside there are coal stores and a laundry rooms. Carriage and horse access to the rear, own spring in quiet area on the edge of town opposite the manor house.

My how things change, just £450 for the towns largest new Georgian house, what a bargain! Whilst there can be no doubt about how the price of things has changed there is one thing that hasn’t changed too much and that is Louth.

Should our guests at All Seasons be able to travel back in time to the day the house was built, they would still be able to walk out of the door and onto Eastgate just as they can now. Turning left and heading along Eastgate into the town centre of 1776 our guests would still have many familiar landmarks to guide them around town. Almost all the shops of 2013 are over 200 years old so the street would be familiar, what would be quite noticeable apart from the total lack of cars would be the road surface, a dusty chalky track in summer and a soggy mess in winter.  Grooves of carts may be noticeable and piles of dung from horses along its entire length.  Pavements would have existed along Eastgate, in parts of York Stone but mostly of stone/chalk with the kerb being quite a drop down to the gutter and road surface. On the street corners, piles of refuse left out causing not just a pong but in the dark, a dreadful hazard to anyone who is a little unsteady on their feet. In the evenings there were a few people who were unsteady on their feet as the town had plenty of pubs, possibly more than today and the streets were mostly unlit.

Crime was fairly low then and still is now but in the old days the penalties for relatively small crimes were extreme.  Crimes against property and theft of money were dealt with most severely, whilst crimes against people less so. Punishments could involve whipping at the house of correction for stealing. In the summer Of 1824 George Brewster, a Louth bricklayer, was sentenced to seven years transportation for bigamy. Robert and Mary Burton of Louth were found guilty of stealing a purse containing £70 from Joseph Cheetham, a Louth victualler. The husband was sentenced to fourteen years transportation and the wife was sentenced to death, but reprieved – severe!

The grammar school, St James Church, most of the roads would all be in place just as they are today; even the navigation canal was built down towards the riverhead.  Be prepared for the smell in Louth in 18th century, smoky in the cold winter months from hundreds of coal and log fires (our house at All Seasons could have had over 12 fires burning) and maybe a rotten stench in the height of summer. The good news is though 200 years ago the summers weren’t too warm and the winters severe so all that mush in the street would have been frozen for weeks at a time. The firing of bricks at the kilns and the burning of lime would have filled the air with fumes with over a dozen brick pits around the town (extracting clay to make the bricks).

Planning a trip to Louth in the 18th century? Then you will need to set off early. Remember this is a market town built up on the wool trade, expect plenty of sheep along the roads and watch out for any ruffians. This is Poacher country, regarded by Henry VIII as “England’s Rudest Shire”  (Henry VIII had Louth’s vicar strung up, disemboweled and chopped into four pieces to end the Lincolnshire uprising) so keep your whits about you and carry a pistol…

Gutters along the front protruded out around 2 feet and were wooden, lined with lead, the drains in position as they are now draining down onto the pavement below and out along the gutter. The two small windows of the cellars aren’t original, possibly preceded by rectangular vertical coalscuttles to allow delivery of coal from the street into the cellars below.

The windows and doors at ground level are deliberately lofty to escape the mud splashes of 18th century life and traffic passing along Eastgate from the busy and newly opened navigation canal. Louth is a market town rising up from the marshes so possibly flooded on occasion.

Bricks from the building were from two different brickyards, the front bricks carefully fired and more expensive than the side and rear bricks but all from local yards. Front bricks are so well made that mortar of just a few mm is all that is needed to build the house. Mortar consisted of a mix of lime, sand and water. The roofing material was certainly not slate and would have been pan tiles, fired from local clay. Indeed shims found in the house to alter levels of fireplaces etc are all flat shells from the beaches and marshes of the Lincolnshire coast indicating slate wasn’t around at the time.

Glass, Glass everywhere, this house was built after the tax on windows. In fact the middle 2 windows above the central door are just for show and looking through the glass shows a bare mortar wall covering the brick. At All Seasons every apartment has at least 1 pane in each window at the front from 18th century. Georgian glass is easily recognized by the curved grooves in it as it was formed on a flat plate and then spun, the central piece being used for servant’s windows commonly seen at the back of houses known as a bull’s eye. Glass was hugely expensive in 18th century hence the relatively small but distinctive windowpanes and didn’t become readily available until mid 1800s (Victorians had large window panes of just 1 pane in each sash as opposed to 6 or 8 panes per sash in Georgian windows).

The front doors show a number of features with the central door being complete as it was in 1776. The central door is a typical Georgian door with 6 panels and an ornate fanlight over. the others have plain glass fan lights more characteristic of Victorian period with a 3 panel door on the right.  Leading into the central door the floor is original flag York Stone and carries the wear of over 230 years of feet, the other doorways lead to more elaborate flooring made from Minton Tiles from the Victorian period. Just to the right of the front door remnants of a boot scraper, a necessity prior to entering the house perhaps?

“Wow! what a lovely place! Will certainly stay here again… made such a nice change...”... More reviews on Laterooms

“Astounding apartments, coupled with hospitable hosts. Having stayed at All Seasons 3 times...”... More reviews on Google

“We have recently had the most wonderful stay in the EAST GATE Apartment for 5 nights in...”... More reviews on Trip Advisor

“The apartment absolutely exceeded our expectations. It really is a home from home…...”... More reviews on Booking.com